Previously to use hardware (PVDM-based) transcoding you needed to register DSPFarm on CUCM or CME. But what if you don’t use any of these call control platforms, just have a router working as CUBE and want to accept one call leg and set up another with a codec different from originating? Starting with CUBE 9.0 Cisco has introduced Local Transcoding Interface (LTI) feature that permits you to register transcoding DSPFarm profile on CUBE itself.

CUBE version is mapped to IOS version, some information on version correspondence can be found here. The exact CUBE version on your router can be verified with show cube status command.

The call flow I used to test the feature is the following:

Here is a configuration example:

Then trying to establish the call.

After the remote party answered the call, we can see RTP streams for both call legs up:

It doesn’t tell us though which codec both call legs are using. Show call active voice command does that:

Here are the active sessions on configured DSPFarm:

All the output below is taken using debug ccsip messages. Messages not related to codec negotiation are omitted.

Then it resends the INVITE to Remote IP PBX proposing the same codecs:

The Remote PBX responds with an error message:

The response means that some media capability (we know it’s a codec) is not acceptable at the remote end. RFC3261 says this type of message MAY include a description of media capabilities that weren’t accepted so this could have told us what exactly the remote end didn’t like, but unfortunately in this case it doesn’t.

which remote PBX accepts sending an OK response with acceptable media capabilities list including G.729. This actually happens when remote user picks up the phone. Here is the message: 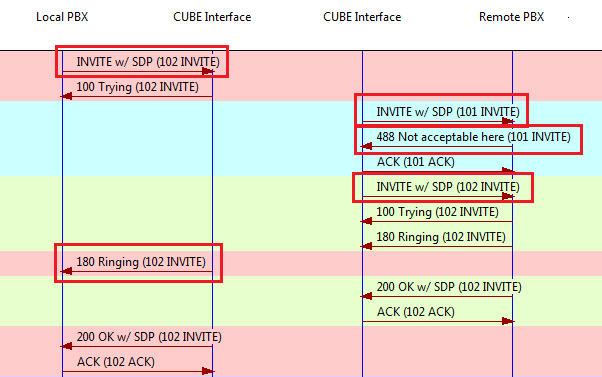 Changing the priority or leaving just G.729 will do the trick.